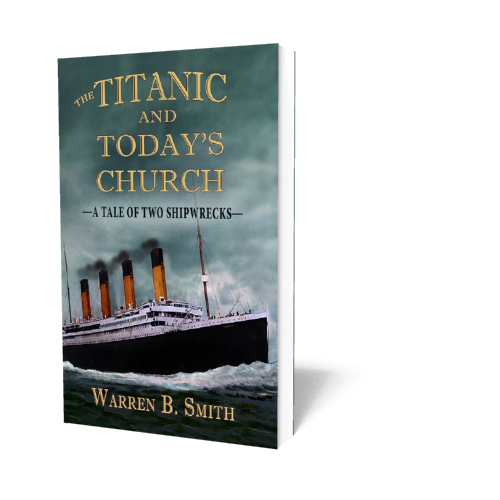 The Titanic and Today's Church

—A TALE OF TWO SHIPWRECKS—

At 11:40 p.m. on April 14, 1912, the RMS Titanic— the biggest, grandest ship of its time— collided with an iceberg on its maiden voyage from Southampton, England to New York City. Less than three hours later the seemingly unsinkable ship did the unthinkable— it sank to the bottom of the North Atlantic Oceanarium.

It has been well documented how pride, false confidence, complacency, disregarded warnings, and general unpreparedness all played a part in the Titanic shipwreck. Those in charge had underestimated the physical danger in their midst. Sadly, today's professing church shares many of these same characteristics as it similarly underestimates the spiritual danger in its midst.

The Titanic and Today's Church is the story of two shipwrecks. One took place over a century ago; the other is in progress and is happening today. The similarities are astounding as they compel us to become more aware of our Spiritual Adversary's schemes and devices (2 Corinthians 2:11), effectively "stand against them" (Ephesians 6:11), and "come out from among them" (2 Corinthians 6:17).

Warren B. Smith (B.A. University of Pennsylvania; M.S.W. Tulane University)— A veteran who worked at the White House Communications Agency and later became a community social worker, serving as a program coordinator for people with special needs, directing several homeless programs, and working as a Hospice social worker in New Orleans and on the California coast. After leaving the New Age movement and becoming a Christian, he began writing extensively on the subject of spiritual deception.