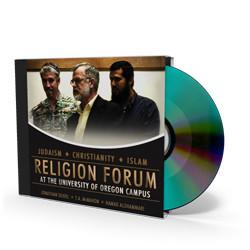 The Lord opened a rare opportunity to publicly proclaim the gospel in a civil setting on a secular university campus when T. A. McMahon participated in a religion forum at the University of Oregon which featured views of Judaism, Islam, and Christianity.

Although the non-debate format required that the speakers could only address and answer questions regarding their own beliefs, the content is quite informative, even rather startling. Viewers will be better informed on worldviews that oppose biblical Christianity, and, we pray, inspired and equipped to proclaim the Gospel.

T. A. presented his perspective as a biblical Christian. Rabbi Jonathan Seidel spoke from the viewpoint of liberal Judaism, and Hamad Alshammari, U of O Muslim Student Association president, offered his view of Islam. A question and answer session followed the brief presentation by the speakers.

Gratefully, we were permitted to video the proceedings, and though the audio quality is lower due to unforeseen circumstances, we offer this "value-priced" DVD as a helpful tool for understanding contemporary expressions of Judaism, Islam, as well as a concise presentation of "What A Biblical Christian Believes."