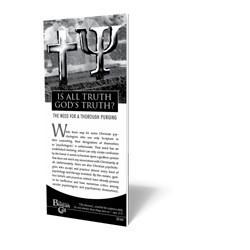 The Need for a Thorough Purging

While there may be some Christian psychologists who use only Scripture in their counseling, their designation of themselves as "psychologists" is unfortunate. That word has an established meaning, which can only create confusion by the honor it seems to bestow upon a godless system that does not merit any association with Christianity at all. Unfortunately, there are also Christian psychologists who accept and practice almost every kind of psychology and therapy invented. By this means, godless beliefs and practices (which have already proved to be ineffective and have numerous critics among secular psychologists and psychiatrists themselves), have been brought into the church. In order to return to biblical Christianity, the church must purge itself of psychological theories and terminology, and then divest itself of this rival religion that it has taken to its bosom.

Distilled from chapters in his books and newsletter articles on pivotal issues, these eight-panel, black-and-white tracts were created because of the frequency of reader inquiry.