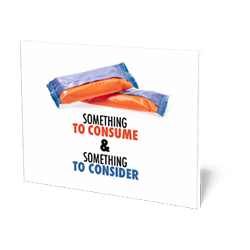 Available for free but you must pay for shipping. Donations are accepted but not required.

"Man shall not live by bread alone, but by every word of God."

Man did not make up that sentence--God did.

It's found in His direct communication to mankind referred to as the Scriptures, the Bible, or simply, the Word of God.

Without God, our infinite Creator, revealing information about Himself to His created beings, we would be left with only our finite speculations, opinions, guesses, hunches, and theories about Him.

But He has revealed details about Himself that everyone needs to know.

Let's start with God himself, who is infinitely wise and powerful, who created everything at the beginning of time...and declared that it was "very good!"

Then a problem arose. The first humans decided to do their own thing in disobedience to their Creator, and that corrupted them and all of creation.

Their sin was passed down through the generations that followed, with the result being that "all have sinned," in other words, all have disobeyed God in some form.

God set the consequences for sin: separation from Him forever.

Humanity is incapable of paying off the penalty for its sins because the penalty is eternal...infinite.

God's perfect justice demands that the penalty must be paid in order for humanity to be forgiven and reconciled to Himself.

What man cannot do, however, God, who is infinite, can...and did.

God, consisiting of the Father, Son and Holy Spirit, sent the Son (Jesus) who became a man (without ceasing to be God) in order to suffer the eternal punishment for all the sins of mankind.

Jesus paid the penalty completely for the sins of humanity during His crucifixion and death on the cross, thereby satisfying divine justice and providing the way for everyone to be reconciled to God!

Reconciliation with God (also called salvation) is a free gift that can be received only by faith, in other words, by believing in and trusting in Jesus alone for His sacrifice for sin.

These info tips comprise the good news (the gospel) of biblical Christianity. They are not man's ideas but what God has communicated directly to mankind in His Scriptures, the Bible.

Receiving the good news also includes the beginning of an intimate relationship with Jesus our Creator, understanding why we were created, having hope that replaces our former hopelessness, experiencing personally God's love, His loving kindnesses, His tender mercies, and His answers to our prayers.