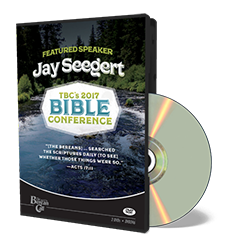 Jay Seegert's sessions from the TBC 2017 conference include: