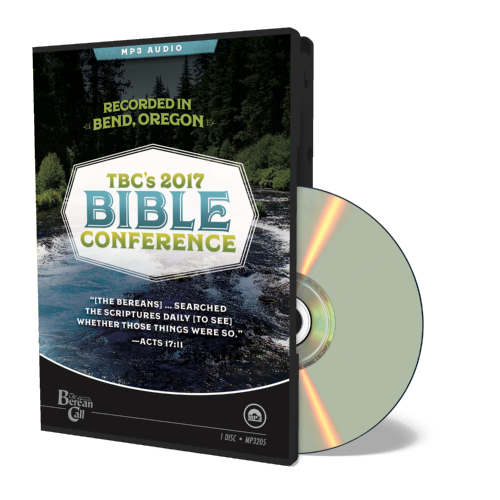 We give thanks to the Lord for allowing The Berean Call to have another outstanding conference. This year, alongside T. A. McMahon, we were encouraged by returning speaker Jay Seegert, and were also blessed by newcomers Mike Warren, Rod Page, Trevor Baker, and Paul Smith. The topics ranged from Creation vs. Evolution, Biblical discernment, ministry through Music, and more! Our speakers covered a wide variety of issues plaguing the church today but all pointed back to where our salvation lies: in Christ alone!

T.A. McMahon is the president and executive director of The Berean Call ministry, editor-in-chief and contributing writer for The Berean Call newsletter, co-author of The Seduction of Christianity, The New Spirituality, and author of Showtime for the Sheep? and Temporal Delusion. Holder of a master's degree in communications, he has researched and written numerous documentaries and scripted several feature films. His writing/producing for Christian videos includes The Cult Explosion, The God Makers, Israel, Islam, and Armageddon, and Psychology and the Church.

Jay Seegert holds degrees in both Physics and Engineering Technology and is the director for The Starting Project, a ministry that addresses creation vs. evolution and has as its objective to "help the believer think. . . and the thinker believe." The Starting Point Project's "starting point" is "that God exists, and the Bible is His inspired Word."

Mike Warren is the senior pastor of Calvary Chapel Gold Country in Grass valley, CA. He is a featured speaker in the apologetics documentary Wide is the Gate 3. As one with a shepherd's calling, Mike's passion is to encourage believers in the love of Jesus and the truth of His Word.

Rod Page is the pastor of Lewiston Community Church in Lewiston, California, which is a short distance from Redding, California, where Bethel Church and its School of Supernatural Ministry are located. Rod was involved in churches that were satellites of Bethel so he is well acquainted with the worldwide influence of the church and the school's false teachings.

Trevor Baker has performed in more than 1,800 concerts in his seventeen years of full-time ministry. Preceding that were several years of part-time ministering, which included singing on street corners. Since picking up the guitar in 1990, Trevor has thus far released nineteen albums and three DVDs that have received airplay in Canada, the US, Europe, and other parts of the world. He has written and recorded more than 200 songs to date. With much of the present-day church running after "every wind and wave of doctrine," most of the songs that God has given to him are for the purpose of calling the church to repentance.