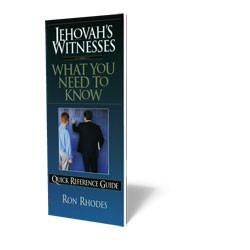 Jehovah's Witnesses: What You Need to Know

Ron Rhodes summarizes Watchtower teaching and methods for witnessing to Jehovah's Witnesses. These 16-panel, full-color, handy fold-out summaries are just the ticket for aiding in the discernment of various teachings.

The Watchtower Society claims to be a prophet of God. However, it has consistently made false prophecies throughout its history.

Jehovah's Witnesses argue that some of the biblical prophets held mistaken views and yet they were not condemned as false prophets. Neither should the Watchtower Society be condemned for prophetic errors. This is faulty reasoning. The disciples on occasion said something as human beings and made mistakes. However, when the apostles or prophets spoke as God's mouthpieces, there is no possibility of error—for they were communicating direct revelation from God (Deuteronomy 18:18, 2 Samuel 23:2; 1 Corinthians 2:13).

Sometimes Jehovah's Witnesses give an apology for the Watchtower's prophetic errors (as a way of disarming further criticism against the Watchtower). But where in Scripture does it say that if one apologizes for a false prophecy one is no longer a false prophet? Scripture is firm: A biblical prophet must be 100-percent accurate (Deuteronomy 18:22).