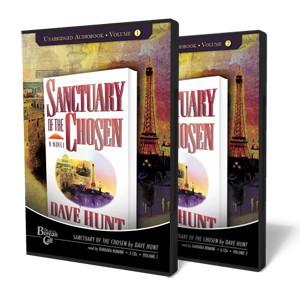 From the very first minute, listeners will be captured and transported into a realm of non-stop action and intrigue that spans the globe. Caught in a conspiracy linking Washington, Moscow, and Rome, Ari Thalberg must make a choice that could catapult him into leadership in the New World Order...or into destruction.

As a young boy, Ari Thalberg was raised as one of the Party’s elite—East Germany’s hope for dominance in a future world system. But Ari leads a double life: a loyal party member by day, the brilliant organizer of student protests to overthrow communism by night. When the conspiracy is uncovered, Ari is marked for destruction.

Now a fugitive without a country, only one nation will take him in. There he must finally face the truth about his despised heritage and the forces that have controlled his destiny. Will Ari’s love for Miriam cause him to heed her warnings before it’s too late? Or will his fateful obsession to establish world peace drive him into a diabolical chess match with powers beyond his control?

Romance, intrigue, and a search for truth collide in a frantic race against death and the forces of evil. Anchored in historic events, true-to-life circumstances and Bible prophecy, this compelling drama takes you behind the scenes of future world events, in a story that is powerful, poignant, and purposeful.

Read by TBC staff member Barbara Romine. About 10.5 hours of listening enjoyment make this a wonderful way to “redeem the time” while driving or relaxing, and a great way to share the excitement of this Dave Hunt classic with others.