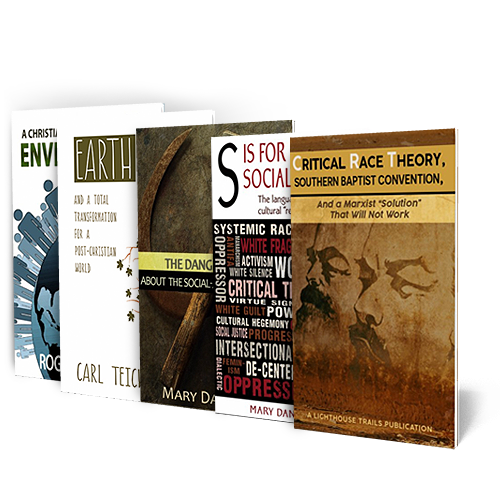 We’re pleased to offer these fantastic booklets from Lighthouse Trails! Each booklet covers a topic in just a few pages and is perfect for personal study or to give to others. These five booklets are available as a set or individually. We hope to feature more in the future.

This set includes all five booklets listed below:

LHT Editors —  In June 2019, the Southern Baptist Convention (SBC) passed Resolution 9: "On Critical Race Theory and Intersectionality." Critical Race Theory is a political/philosophical-driven ideology that claims to be a solution to ending racism but according to critics actually presents a "solution" that will install Marxism into our society while creating a sentiment leading to escalated conflict and diminished freedom for all. Lighthouse Trails, 18 pp.

S is for Social Justice

Danielson —   This booklet takes a look at "social justice" terms being touted today. The contrast between the social justice "narrative" and what is written in God's Word is very apparent. In God's economy, the terms "justice" and "gospel" are clearly defined in biblical texts.  Lighthouse Trails, 18 pp.

The Dangerous Truth About the Social Justice Movement

Danielson —   Many Christian believers are expressing concern today, and rightly so, over something called "social justice" or the "social justice gospel." Jim Wallis is one of the top "change agents" in the social-justice movement withing the evangelical/Protestant church. Mary Danielson has done a thorough investigation into the writings of Wallis and brings numerous problems with the Social Justice movement to light.   Lighthouse Trails, 18 pp.

Earth Day and a Total Transformation in a Post-Christian World

Teichrib —   Just as in olden days, the earth has become the focal point for worship. In Grecian times, the supreme Earth deity was Gaia, also known as the Universal Mother. Sacred oaths were given in her name, and worshippers performed rituals in her honor. In our contemporary era, Earth Day has become the modern celebration of Gaia. Partakers of this event, whether aware of it or not, play off the ancient pagan beliefs of a Universal Mother. Like the sacred oaths taken in her name, today's Earth Day celebrants sign environmental petitions, make pledges, and announce resolutions in support of Mother Earth.   Lighthouse Trails, 14 pp.

Oakland —  In 2016, Roger Oakland presented a paper on the environment from a Christian perspective at an energy, water, and environment conference held in Rome, Italy. This booklet includes that information.   Lighthouse Trails, 18 pp.

Lighthouse Trails Booklet Set #13 "Through It All"